The Girls of Piazza d'Amore 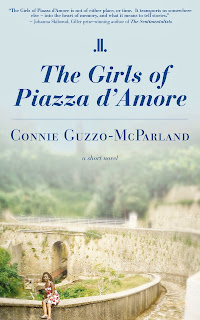 On September 19th I had the pleasure to attend Connie Guzzo-McParland’s book launch at the Cultural Center of Little Italy in Montreal which is better known as Casa d'Italia. Connie is a versatile and accomplished author, businesswoman, and publisher, to name a few.  Her debut novel, The Girls of Piazza d’Amore, is the love story of three girls, and the forces that lead them to leave their village for a better life across the ocean.


Born in Italy and raised in Montreal, Connie shares a richly texture story of immigration and childhood. However, at the book launch she explained that she wanted to tell much more than that and hoped the reader could read in between the lines of these simple stories and see the bigger stories within them.  She then added, “In putting down on paper some of the images of village life I carried in my head for years, I hoped to illustrate how a group of people were affected by the changes happening in villages all over south Italy in the 50s- soon after the effects of the war and just before the modernization of Italy and its economic boom of the 60s.”


Connie read two excerpts from the novel; they were humorous, light, picturesque, and colorful. Before reading, she explained that “the novel only alludes to these issues in a lighthearted, cheerful tone, since it’s recounted from the perspective of a young girl. For the general Canadian reader, I wanted to show that the men and women who would become their factory workers, their tailors, barbers, gardeners all carried interesting stories behind them.”


I posted the book cover so you can get the feel of the village. Connie told the audience that, “the cover image represents a very important landmark of the village, a communal water fountain in the outskirt of the town, where women used to fetch water every evening and also do their weekly laundry. It was also the meeting place for young people to exchange glances and love notes, and some key scenes in the book are set in this fountain.”


Although Connie is the Co-director and President of Guernica Editions, she published her book with Linda Leith Publishing.


I hope I have piqued your interest so you, too, can enjoy this beautifully written story about love and friendship in Italy.